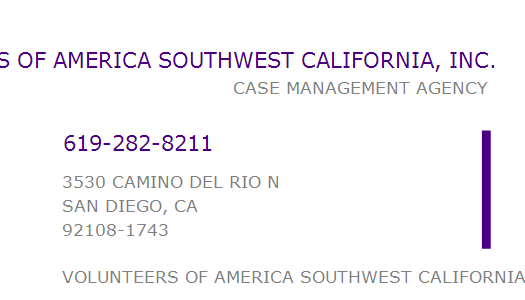 The Volunteers of America Southwest said it implements the highest standards of accounting and is trying to work with the county to resolve the matter. The organization declined to answer further questions from The San Diego Union-Tribune. The audit findings were first reported by the Voice of San Diego, which linked the audit findings to county records and two lawsuits filed by former Volunteers of America Southwest employees.

A county audit of nonprofit organization Volunteers of America Southwest found that more than 6.5 million dollars should be repaid to the county. The audit was initiated when county auditors questioned the charity’s accounting practices for its fiscal year 2016-17. After finding incomplete and insufficient information, they looked more closely at previous years’ records. They cancelled the nonprofit’s contract with the county and ordered corrective actions on four other contracts.

County officials are demanding that Volunteers of America Southwest repay them about $6.5 million in public funds that were allegedly misused. County auditors uncovered a large number of billing and financial irregularities, including improper use of county funds. County officials say that the real amount of alleged misspending may be much higher.

While local groups have their own boards and operate independently, the national organization can intervene if necessary. In this case, the VOA took over the local organization’s operations and cancelled the chapter’s charter. The local nonprofit is expected to repay the funds to avoid any legal trouble.

$274,000 in payments to companies with direct ties to employees

Volunteers of America Southwest recently made an audit public showing that the nonprofit organization made $274,000 in payments to companies with direct connections to its employees. Those payments allegedly came from the nonprofit’s finance department. The audit’s findings prompted the county to demand millions in restitution. As a result, the nonprofit has replaced its local executive and board of directors.

Volunteers of America is an organization that provides services and meals to the poor. It has affiliates around the United States, including a San Diego branch. Founded 125 years ago, the organization is comprised of volunteers and professional staff.

The nonprofit’s finances are questioned after an audit revealed that it had billed multiple public entities for the same services. At one point, the nonprofit billed county, state, and federal governments. It also double-billed local hospital chains. In addition, the nonprofit admitted to some double-billing and acknowledged the problem.

As a Volunteer of America San Diego volunteer, you will need to be drug and TB-free. TB is a serious disease that can spread from one person to another. To prevent TB infection, you will need to be screened and have a TB test. To get this test, go to the Heartland National TB Center.

To become a volunteer for Volunteers of America San Diego, you must complete TB/Physical TB/first aid training. Volunteers must be able to pass a drug and alcohol test and have been cleared by funding agencies. Volunteers must have a valid state identification card and must be in good health.

The CDC requires volunteer organizations to conduct an annual TB/physical TB/First Aid test on all volunteers. This test is done by a health care provider licensed by the federal government. If the result of the test is positive, an individual must see a physician and undergo a chest X-ray. Volunteers must also take a TB/Physical TB/First Aid drug test once every year.

Ethnic groups are disproportionately vulnerable to societal ills, including access to food, shelter, health care and other essential resources. Exposure to violence and loss of community ties compound these disparities. Mass political upheaval, genocide, slavery, and other disasters can disrupt family and community relationships, leaving them open to further victimization. In many places around the world, such as Central and South America, Africa, and the Balkans, mass displaced populations remain a constant challenge.

Forcing displaced individuals and families to leave their homes is a daunting task. The impact of displacement is devastating, as most of these individuals are stateless and unable to protect themselves or their families. Often living in crowded public shelters, they are subject to assaults, robbery, and illness. Many have experienced violent abuse or witnessing horrific scenes of violence.

Disaster relief organizations are often led by faith-based organizations. For example, the American Red Cross sets up Family Assistance Centers in disaster-affected communities. These centers provide grief counseling and crisis counseling to survivors. They work in conjunction with federal agencies and NGOs, such as the United Methodist Committee on Relief and Church World Services, to provide psychosocial support and traumatic stress counseling. Disaster-focused NGOs include Action Aid-United States, the American Refugee Committee, and Doctors Without Borders.